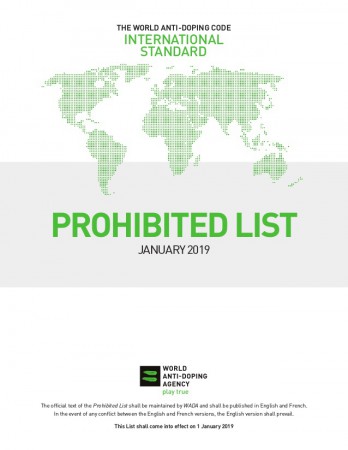 The World Anti-Doping Agency (WADA) publishes the 2019 List of Prohibited Substances and Methods (List); the 2019 Summary of Major Modifications and Explanatory Notes; and the 2019 Monitoring Program. The List, which was approved by WADA’s Executive Committee (ExCo) on 20 September 2018, comes into force on 1 January 2019.

The List, which is one of six International Standards that are mandatory for all Signatories of the World Anti-Doping Code (Code), designates what substances and methods are prohibited both in- and out-of-competition, and which substances are banned in particular sports.

WADA Director General Olivier Niggli said: “WADA is pleased to announce the publication of the 2019 Prohibited List. Updated annually, it is one of the cornerstones of the global anti-doping program. Every year, we review the List in consultation with a wide range of stakeholders. It is vital that we stay ahead of those that endeavor to cheat the system so in reviewing the List, experts review sources such as scientific and medical research, trends, and intelligence gathered from law enforcement and pharmaceutical companies.”

The List is released three months ahead of it taking effect so that athletes and their entourage can acquaint themselves with any modifications. Ultimately, athletes are responsible for the substances in their body and the methods on the List; and, athlete entourage are also liable for anti-doping rule violations if determined to be complicit. Consequently, if there is any doubt as to the status of a substance or method, it is important that they contact their respective Anti-Doping Organization (International Federation or National Anti-Doping Organization) for advice.

The List’s annual revision process is led by WADA, beginning with an initial meeting in January and concluding with the publication of the List by 1 October. This is an extensive consultation process that includes WADA’s List Expert Group gathering information, circulating a draft List among stakeholders, taking their submissions into consideration and revising the draft, followed by review by the Agency’s Health, Medical and Research (HMR) Committee.

The HMR Committee then makes its recommendation to the WADA ExCo, which approves the List during its September meeting.

For a substance or method to be added to the List, it must be determined that it meets two of the following three criteria: