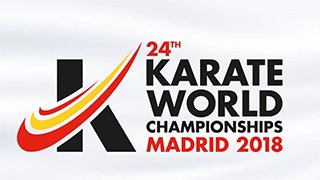 Spain is a state located on the Iberian Peninsula in south-western Europe, with two large archipelagos, the Balearic Islands in the Mediterranean Sea and the Canary Islands off the North African Atlantic coast, two cities, Ceuta and Melilla, in the North African. The country's mainland is bordered to the south and east by the Mediterranean Sea, to the north and northeast by France, Andorra, and the Bay of Biscay; and to the west and northwest by Portugal and the Atlantic Ocean. Spain currently has 65.000 affiliated karatekas and nearly 2.000 clubs. In the last edition of the Karate World Championships Spain finished in eight position of the medal table with a tally of five medals (three silver and two bronze medals)

The event will be celebrated in the Madrid region, in the city of Madrid. The Madrid region is an area of over 8000 km2 located in the centre of the Iberian Peninsula. The city of Madrid is the capital of the region and also the capital of Spain. It has nearly 7 million inhabitants and it takes the first place in the national gross product. The tournament takes place at the WiZink Center sport hall. Situated at Avenida Felipe II in downtown Madrid, this state-of-the-art arena holds 10.000 spectators and it is the venue of major cultural and sports events in the city.