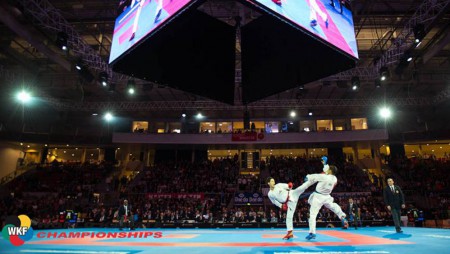 The documentary “Karate Magic in Linz” will premiere exclusively on the Olympic Channel on Monday, December 26. The 30-minute film tells the story of the 2016 Karate World Championships from the emotions and excitement of thousands of Karatekas and Karate fans around the world, to the quest of medals and the experiences of top competitors and ‘Karate Stars’ during the tournament.

The 23rd edition of the Karate World Championships was held in Linz, Austria from October 25 to 30. Here, new Karate heroes were crowned in the first flagship event of the sport after the announcement that Karate will be included in the programme of the Olympic Games Tokyo 2020.

The best moments of the competition and behind-the-scenes with the main actors of the sport are the foundation and centrepiece of the documentary, which traces the journey of athletes from their arrival at the venue to the anticipated highlight of the medals and their presentation as new World Champions. “Karate Magic in Linz” also depicts the particularities and singularities of the discipline prior to its debut as an Olympic sport in the Olympic Games Tokyo 2020.

“This documentary is an excellent opportunity to show the magnitude of our World Championships and the excitement of our sport. I am sure that Karate enthusiasts will enjoy this film, and I would like to thank the Olympic Channel for its exceptional support and cooperation to make our sport available to millions of fans around the world,” said the WKF President Antonio Espinós.

The Olympic Channel is a ground-breaking, multi-platform destination where fans can experience the power of sport and the excitement of the Olympic Games all year round, and is available worldwide via mobile apps for Android and iOS devices and at olympicchannel.com.