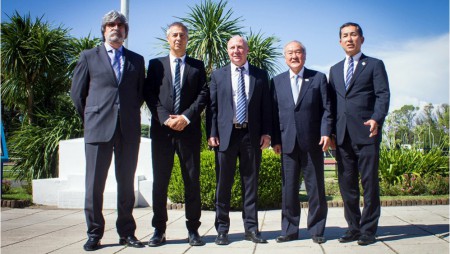 The Minister in charge of the Tokyo Olympic and Paralympic Games, Shunichi Suzuki visited Buenos Aires to review the venues of the upcoming Youth Olympic Games and to analyse different projects in South America. During his tour to Argentina, Mr Suzuki met with WKF First Vice President José García Maañón.

The Japanese delegation headed by Mr Suzuki inspected the preparations for the 2018 Youth Olympic Games. During the first day, the Minister in charge of the Tokyo Olympic and Paralympic Games was welcomed at the headquarters of the Secretary of Sports by the head of the institution Carlos Javier Mac Allister and by José García Maañón, who also acts as National Sports Director and Vice President of the Argentinian Olympic Committee.

(Picture: Mr Shunichi Suzuki (second from right) and Mr José García Maañón (first from left) at the headquarters of the Secretary of Sports)