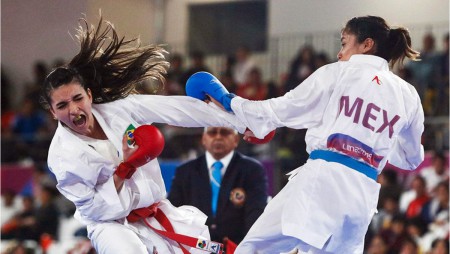 Karate will be one of the 33 sports to provisionally conform the programme of the Pan American Games 2023. The event is scheduled to be held in Santiago (Chile) from October 20 to November 5, 2023. The Executive Committee of Panam Sports confirmed the sports programme of the 2023 edition of the biggest multi-sport event of the Americas in its meeting which took place in Puerto Rico this past week.

“With the confirmation of the inclusion of Karate in the programme of the Pan American Games 2023, we are demonstrating the tremendous strength and popularity of Karate in the region,” said WKF President Antonio Espinós.

“Additionally, this inclusion demonstrates that we provide enormous benefits to multi-sport events since the prestige and impact of the event are reinforced by our many values. Now we have the chance to further work with Panam Sports to contribute to the success of the Pan American Games in 2023,” added the head of Karate’s international governing body.

“I want to express my most sincere congratulations and gratitude to the Pan American Karate Federation (PKF) and its President José García Maañón for their outstanding efforts in achieving this great success for Karate. The inclusion of Karate in the Pan American Games 2023 is wonderful news for our sport, and I am sure that the PKF with Mr García Maañón at the helms will continue playing a key role in the progress of our sport,” stated Mr Espinós.