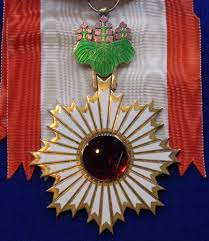 On November 03, 2019 (Culture Day in Japan) President José García Maañón was awarded by SM the Emperor of Japan with the Order of the Rising Sun

This decoration dates back to the year 1875 of Emperor Meiji which was initially awarded only to Japanese citizens; Only since 1981, foreign nationals were awarded for the outstanding contribution in international relations between Japan and other countries through the promotion of their Culture, the development of social welfare or the preservation of the environment.

This important decoration has been awarded to Dr. José García Maañón for his contribution to the promotion of karate and friendship relations between Japan and Argentina.

Letter from Mr Ambassador of Japan to Argentina